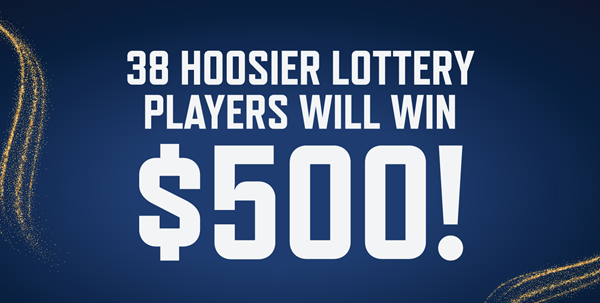 This is the third multi-state “Powerball First Millionaire of the Year” promotion. Last year, Hoosier Lottery player Steven Everage, 46, from Seymour was one-of-five national finalists. He was the recipient of the “Party@Home” New Year’s Eve party package and was interviewed by country artist Jessie James Decker during ABC’s live broadcast of “Dick Clark’s New Year’s Rockin’ Eve with Ryan Seacrest 2021.”

Everage offers advice for Hoosier Lottery players: “For other people that enter 2nd Chance drawings I say enter them, because you have a chance to win. I mean, I had never won a 2nd Chance drawing, so if I can do it somebody else sure can.”

Like last year, five national finalists will be randomly selected in November by the Multi-State Lottery Association (MUSL) from the pool of semi-finalists submitted by participating lotteries across the country. The five finalists selected from the pool will win a “Celebrate@Home” New Year’s Eve party package valued at $20,000—including a $10,000 cash prize, deluxe surf and turf dinner from Omaha Steaks, 70" LED television, home theater sound system, Party City gift certificate, and more. All finalists will be entered in the drawing for the $1 million prize and the chance to become the “Powerball First Millionaire of the Year.”

Non-winning Powerball tickets purchased from May 23 through June 19 can be entered by Hoosier Lottery players into the myLOTTERY 2nd Chance “Powerball First Millionaire of the Year” promotion. The Hoosier Lottery semi-finalist drawings will occur on or about June 9, 16 and 23.