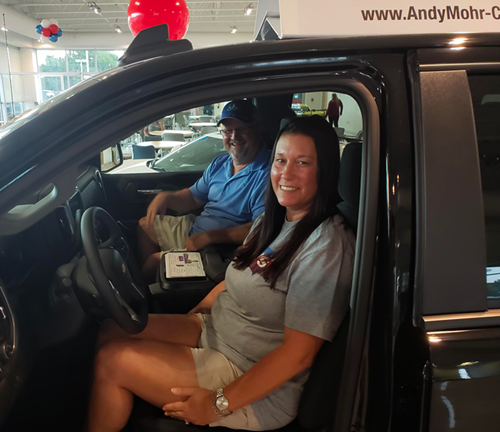 INDIANAPOLIS (September 1, 2021) – The Hoosier Lottery awarded a Frankfort, Ind. man, 57, and his fiancé a 2021 Chevy Silverado won as part of its 2021 Indiana State Fair Truck Giveaway 2nd Chance Promotion during a celebration at Andy Mohr Chevrolet on Tuesday afternoon. The week started out exciting for Jeff Ramsey and Amber Maddox—the “Future Mr. and Mrs.”—who are set to be married this Saturday, September 4.

When the couple arrived at the dealership, they found their brand new 2021 Chevy Silverado adorned with a big bow and a “Future Mr. and Mrs.” banner across the windshield. The Hoosier Lottery also presented them with a mini wedding cake as part of the celebration.

“It was great to meet Jeff and his fiancé. The idea that they’ve got a big celebration this weekend in honor of their wedding just makes it more special. I don’t know that I recall meeting a winner before where they also have a big event the same week as getting their prize, so it’s just double special,” said Hoosier Lottery Executive Director Sarah M. Taylor.

According to the couple, they were walking between barns at the Indiana State Fair when they noticed Hoosier Lottery Town and decided to play. They submitted four entries into the Hoosier Lottery 2nd Chance Promotion for the truck giveaway—three with Amber’s name and one with Jeff’s name. Jeff’s ticket was ultimately selected from the drawing barrel.

The Hoosier Lottery contacted Jeff immediately after the Indiana State Fair to share he won the truck.

“I couldn’t believe it and had a grin all day,” said Jeff, who works for Pioneer and also raises pigs. “The first person I told was my fiancé. All she could say was, ’No we didn’t! No way!’ We were pretty giddy about it. I told my daughters and they laughed for about five minutes straight because they were so excited about it! Yeah, we’ve had a good time with it so far.”

According to the couple, Amber will be driving the truck.