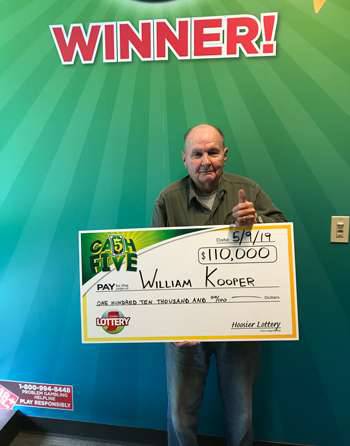 Bill Kooper is a regular player of CA$H 5 and other Hoosier Lottery draw games, but it was on a day he didn’t have a chance to buy his ticket that the retailer he often visits sold a winning CA$H 5 jackpot ticket.

Kooper stopped into Lake Village Food & Gas Mart and an employee told him they sold the winning ticket, asking if he won. He said he hadn’t bought a ticket, and then he wondered if his wife had bought one. He left the store and called her, leaving her a message. As it turns out, she went to Village Food & Gas Mart to buy a newspaper and bought a CA$H 5 ticket with the $2 change she had.

Kooper’s wife, Angie, called him while he was driving and told him to pull over.

“She says, ‘We got all five numbers,’” he said, and he asked her if she was sure. She was sure.

Kooper, a retired electrician, said he plans to put the prize money in the bank.