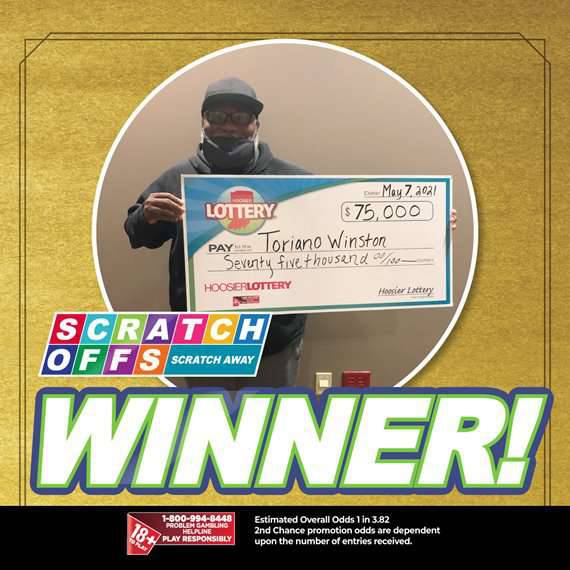 Toriano Winston of Indianapolis claimed a $75,000 Top Prize on the $5 GOLDEN TICKET Scratch-off. The winning ticket was purchased at Mart Stores USA on N. Michigan Road in Indianapolis.

The $5 GOLDEN TICKET Scratch-off had been one of Toriano’s favorite Scratch-offs for a while due to the myLOTTERY 2nd Chance prize, “Every year my wife and I take a trip to Las Vegas and ever since, it has been the only ticket that I’ve been playing,” he said. When he stopped at the gas station, he made sure to buy a few of his favorite tickets before he drove home.

While he was eating lunch, he decided to start playing his Scratch-offs to pass the time. He scratched the first ticket and it was not a winner. After he scratched the second ticket, Toriano was excited because he thought he had won $75. After looking at it closer, he noticed a few zeroes followed the $75.

“I still don’t believe it,” said Toriano. “I scanned it on my phone, it said I won and then I turned my phone off and scanned it and it still said $75,000!” Toriano immediately called his wife to tell her the good news.

Toriano is really excited to use the money to purchase a really nice headstone for his mother-in-law who recently passed away. “I was really close with her and we have been trying to put as much money together as possible to make sure she has a proper headstone.” In addition to this, Toriano is very excited to take his wife on vacation.