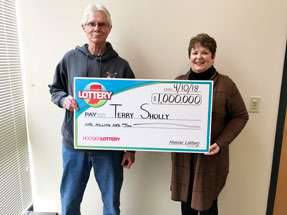 When Terry Sholly realized he won $1 million on a Hoosier Lottery Scratch-off, he hugged the woman who sold him the ticket.

Terry stopped in to the Good to Go on North Jackson Street in Frankfort. He wanted to check the previous night’s Hoosier Lotto numbers. While he was there, he told the cashier to give him two $10 50X The Cash Scratch-offs.

After making his purchase, Terry went to his car and scratched the tickets. He first scratched his numbers, and then the numbers in the play area. He saw numbers that matched. Then, he began revealing the prize under his match.

“I see a zero, another zero, and I’m thinking (I won) $100,” Terry recalled while claiming his prize at Hoosier Lottery headquarters in Indianapolis.

“There’s six zeroes looking at me, and I start shaking,” he said.

Terry went back into the Good to Go to ask the employee if she was seeing what he was seeing. Once they both were convinced he’d won $1 million, the two embraced in a hug.

He then called his girlfriend to see if she was home. He wanted to take the ticket to show her.

Before claiming his prize, Terry set an appointment with financial advisers. He plans to put the money into retirement accounts until he has time to let the win sink in.