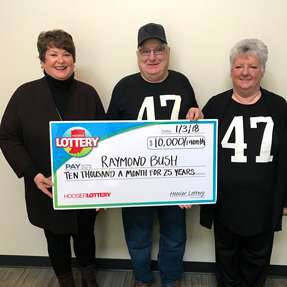 While gathered with family for Christmas, Raymond Bush shared exciting news: He won $10,000 a month for 25 years.

“I can’t wait. You don’t win this kind of money and not tell somebody. I want to tell somebody,” Raymond said while he and his wife, Ruth Ann, claimed the prize at Hoosier Lottery headquarters after the new year.

Raymond, a retired General Motors factory worker, won the first of three top prizes on a $10 Set for Life Scratch-off while on his way to take his brother homemade caramel popcorn.

He bought the winning ticket at Dana Korner Stop, 1500 W. Highway 36 in Dana. He initially purchased a $10 Happy Holidays Scratch-off, and he won. Raymond used his winnings to buy a $10 Set for Life Scratch-off. He stood at the store’s counter and scratched the ticket in front of the cashier, revealing the big prize.

Raymond and Ruth Ann decided to wait until the new year to claim the prize and safely stowed away the ticket.

Raymond took the cash option, which was $2,188,000 before taxes. His plans include donating to his church and buying a new truck.