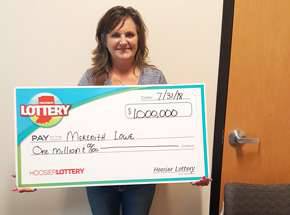 A Hendricks County woman who treats herself every Friday to a Hoosier Lottery Scratch-off got an extra special treat recently: she won $1 million.

Meredith said she likes the $1,000,000 Blowout Scratch-off because of the game’s simplicity. Players look for a money bag symbol; if they find it, they instantly win the prize shown.

The mother of three called her mom screaming and crying to share the news. She scratched the winning ticket in the parking lot of the store where she purchased it, Love’s Travel Stop, 780 Jeff Gordon Blvd., Pittsboro.

Meredith took the cash option, which was $775,521 before taxes. She plans to use the money in a number of ways, including setting up trust funds for her family members and contributing to her retirement savings. She may also splurge by taking a vacation on a cruise.