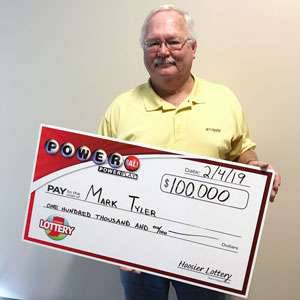 A Rochester man who took a coffee break while shoveling snow bought a Powerball ticket and forgot about it. A couple weeks later, he checked it and realized he won $100,000.

Mark Tyler always buys his Powerball tickets at the same place. He bought the winning ticket at Good To Go, 855 N. State Road 25 In Rochester. He went in to buy another Powerball ticket and had the clerk check his old tickets, which is how he found out he won.

But, Mark and his wife, Debbie, were not confident in the amount they had won. Debbie kept saying it was likely only $1,000.

When they drove to Hoosier Lottery headquarters in Indianapolis, a claim representative confirmed their ticket was a $100,000 winner.

The win will allow Mark to finally retire. He was ready to retire but first wanted to pay off the couple’s car and a pool they had installed to help with Debbie’s back pain. The prize money will allow them to pay off both.