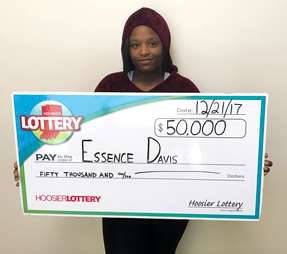 INDY WOMAN PLANS TO PAY IT FORWARD WITH $50,000 SCRATCH-OFF PRIZE

A 22-year-old Indianapolis woman plans to give back after winning $50,000 on a Hoosier Lottery® Scratch-off.

Essence Davis had never played a $3 Pinball Wizard Scratch-off. She bought one a couple blocks from Hoosier Lottery Headquarters in Indianapolis. She quickly realized she may have a winner.

“’We need to go confirm this,’” she told her boyfriend. “I didn’t want to get too excited.”

Essence bought the ticket at Circle K, 1551 N. Illinois St., and traveled to Hoosier Lottery Headquarters, where an employee confirmed that she won $50,000.

Essence works as a housekeeper at a downtown Indianapolis hotel. She said she was just telling someone she wanted to begin a project to assemble kits to make life more comfortable for homeless people in Indianapolis. She plans to use her winnings to expand on her project.

“Now that I’ve got this, I can do more,” she said of the prize money. “We should really be trying to help them out. You never know what people have been through.”

Essence said she would keep some of the money for herself but is excited to give back to the community.