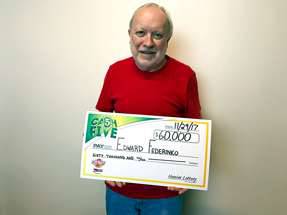 RETIRED TEACHER CLAIMS $60,000 PRIZE IN THE NICK OF TIME

Winning ticket was set to expire in 3 business days.

Edward Federinko knew a $60,000 winning CA$H 5 ticket was sold by the store he frequented. He saw the sign that said as much.

Less than a week before the ticket would have expired, Edward claimed his $60,000 CA$H 5 jackpot prize at Hoosier Lottery headquarters in Indianapolis. Draw game prizes must be claimed within 180 days of a drawing. Edward’s ticket won in the June 6, 2017 CA$H 5 drawing by matching all five numbers.

Edward was a teacher for 37 years in the Chicago area. He lives in Portage with his partner, Ray.

Edward said he had the ticket among some other tickets, but never checked it. When he realized the deadline to claim was approaching, he went through his tickets to see if he had a winner. Sure enough, he found it.

The prize money is likely to stay in the bank while Edward decides what to do with it. He was considering donating at least some of it.