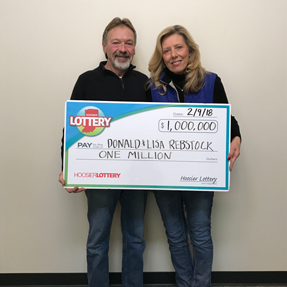 An Evansville woman thought her husband was joking when he called and asked, “Would you retire if we were millionaires?”

Donald Rebstock drove to where his wife, Lisa, works to show her the $1 million winning ticket. Donald won a top prize on a $10 50X The Cash Scratch-off from the Hoosier Lottery.

His exciting week began two days before he bought the winning ticket. On Feb. 6, he played the new Multiply the Cash Scratch-off family and won $40. Two days later, he decided to play again at a retailer he frequents, Green River Motomart in Evansville. Donald bought two $10 50X The Cash Scratch-offs and won $20. So, he bought two more. One of them was the $1 million winner.

Donald scratched the $1 million winner in the store, and he said an employee asked if he was OK because his face went pale. He said his first thought upon realizing he won was, “My wife can retire now.” Donald retired eight years ago.

The couple plans to buy a bigger camper for traveling, help family members and put the rest of the money toward retirement.