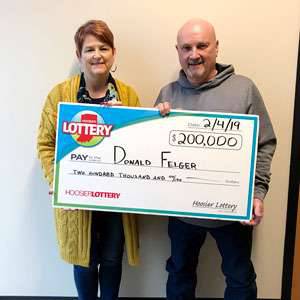 A Fort Wayne man couldn’t believe his eyes when he played a Hoosier Lottery Scratch-off and realized he won $200,000.

Donald Felger was at home when he scratched the winning $5 20X The Cash Scratch-off.

“I saw that 18 pop up (above $200,000) on the ticket. I thought, ‘This is not real,’” Felger said while claiming the prize at Hoosier Lottery headquarters in Indianapolis.

Felger didn’t tell his wife, Kathryn, the night he scratched the ticket. He waited until the next day and nonchalantly asked if she had Monday off work. When she asked why, he said they needed to go to Indianapolis because he won $200,000 on a Hoosier Lottery Scratch-off.

He showed her the ticket and she realized he was telling the truth.

Donald bought the winning ticket at Phil’s One Stop, 3540 Saint Joe Center Road in Fort Wayne. It was the final top prize on $5 20X The Cash.

The couple plans to use the prize money to pay off their car and add on to their lake house to accommodate their growing family; the couple has three adult children and seven grandchildren.