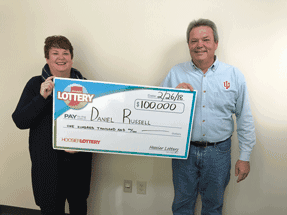 Daniel Russell of Evansville stops every morning at Circle K to buy a Polar Pop drink. And some of those days, he also buys a $5 Blazin’ Hot Crossword Bonus Scratch-off.

“Want any today?” the clerk, who recognizes him, will ask.

On a recent Friday, Daniel’s answer was yes.

“It takes a little time to do, and I like that,” Daniel said of Blazin’ Hot Crossword Bonus.

Daniel took his Polar Pop and Scratch-off and left, waiting until a work break later to play. When he did, he found nine words in the crossword, which means a $5,000 prize. Excited, he took the ticket to a retailer to scan it, and they said he had to go to Hoosier Lottery offices.

Daniel drove to the Hoosier Lottery office in Evansville on his lunch break. An employee told him he would need to drive to Indianapolis. He hadn’t matched nine words for $5,000; he’d matched 10 words to win a top prize of $100,000.

“I said, ‘Just a minute here. Let me sit down,’” Daniel explained while claiming the prize at Hoosier Lottery headquarters in Indianapolis.

Once he collected himself, Daniel was excited by the news and drove to Indianapolis the following Monday to claim his $100,000 prize. He plans to replace his car from 2003 and put the rest toward retirement.