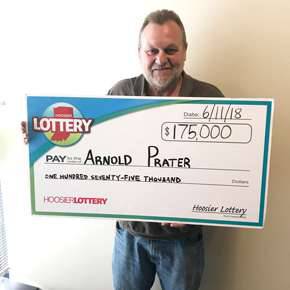 What began as a bad day turned into a great one for Arni Prater of Silver Lake.

Arni had a business disagreement and a family member involved in a car crash. But later that day, after he took a wrong turn in Kokomo, he stopped at a Hoosier Lottery retailer and ended up winning $175,000 on a $5 $175,000 Jackpot Scratch-off.

Arni bought a variety of Scratch-offs and won, so he went back into the store to buy two more Scratch-offs, including a $5 $175,000 Jackpot Scratch-off.

“I’m scratching and I see one of the numbers is seven,” he said, adding the number had personal significance to him because of a death in the family.

Under the seven was the prize for $175,000. He scanned the ticket with the free Hoosier Lottery mobile app to double check it.

“Pinch me!” he told a colleague who was with him.

Arni, who owns a car lot, said he plans to put the prize money into his business. He bought the winning ticket at Krishi Enterprise, 3448 E. 300 South, Kokomo.