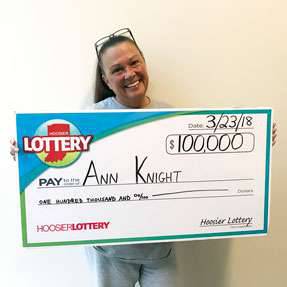 Ann Knight is making up for a canceled vacation after winning $100,000 on a Hoosier Lottery Scratch-off.

After purchasing the ticket, Ann sat in her truck and scratched it. She found 10 words in a puzzle, which is the maximum possible.

“It took me a while before I could leave. I was in shock,” Ann said while claiming her prize at Hoosier Lottery Headquarters in Indianapolis.

She immediately called her husband.

Ann used the Hoosier Lottery app to scan her ticket to double check that she’d won.

While Ann has practical plans for the money, including paying off loans, she also plans to visit the beach. Her vacation was canceled last year as a hurricane battered Florida and nearby areas.