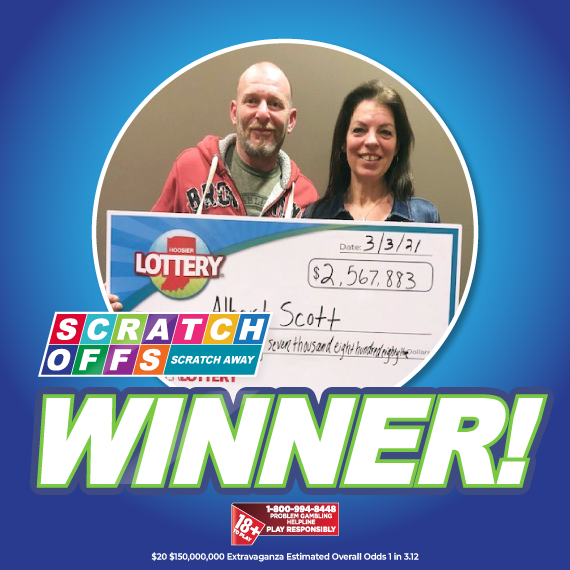 With a little extra money in his pocket, Albert Scott drove to Just Smokes off Earl Avenue in Lafayette and purchased what would become a $3,000,000 top prize winner on the $20 $150,000,000 Extravaganza Scratch-off.

“When I got to the store, I decided I wanted the cashier to pick the game for me,” Albert recalled. “I told her to pick her two favorite $20 Scratch-offs and let me decide which one I was going to buy between the two.” The cashier selected her two favorites and left it up to Albert to choose which one he wanted.

Right before making the decision, he asked what the number was on both games. Albert likes to do this to see if they [the Scratch-off number] hold any sentimental value to him. On one of the Scratch-offs, $150,000,000 Extravaganza, the number was 14. This made him think of Valentine’s Day which led him to think about his wife. He smiled and happily selected the $150,000,000 Extravaganza Scratch-off.

As the cashier promptly scanned the ticket, she was speechless. “The cashier started to go a little crazy and could barely get out the words to tell me how much I had won,” said Albert. “I thought it was a mistake when she told me that I had won $3,000,000.”

Albert quickly called his wife to tell her the good news. Before she could get out a hello, he told her she could quit her job if she wanted. “Wait why? Did you win the lottery?” his wife asked. “As a matter of fact, I did sweetie!” Albert exclaimed. His wife was shocked and kept repeating, “Are you serious?” over and over. As of now, Albert is unsure of what he wants to do with the money; however, he is thinking about using some of the money to start his own business. “It’s something that I’ve always wanted to do, and this money opens up that possibility,” Albert said. “Both of us are very excited, and we look forward to future possibilities.