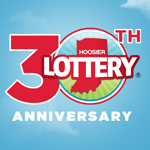 Sarah M. Taylor, executive director of the Hoosier Lottery, noted, “It’s amazing to see the impact the Hoosier Lottery has had on Indiana over the last 30 years. We are so proud of the revenue we’ve generated for the State, and that our revenue is being used to support the pension plans for our retired teachers, police officers and firefighters. These dedicated Hoosiers educated our children and protected our lives and property. We hope that our support helps them enjoy their retirement for years to come.”

Taylor added, “Lottery revenue has also been used to fund a 50% reduction in the auto excise taxes paid by Hoosiers when renewing license plates.”

To celebrate its 30th anniversary, the Hoosier Lottery is launching a marketing campaign showcasing Hoosier connections enabled by the Lottery. The campaign highlights the lives of its players, retailers, employees, and those who benefit from the Lottery. It illustrates just how connected Hoosiers are, whether directly or indirectly. Hoosiers can learn more about these connections and the $6 billion returned to the State at www.hoosierlottery30.com.

Hoosier Lottery Through the Years

The Hoosier Lottery began in 1988 when 62% of Hoosier voters approved a state-run lottery. The State Legislature then established the Hoosier Lottery with the mission “to return maximum net income to the State in a socially responsible manner.”

Over its 30-year history, the Hoosier Lottery has contributed to many big stories. The gameshow, “Hoosier Millionaire,” starring Mark Patrick, Barbara Hobbs, and Tony Lamont, aired weekly for 16 years. The final episode aired in late 2005, culminating with the show’s 191st $1 million winner.

Over the last decade, the Hoosier Lottery showcased its innovation by releasing an NFL themed Scratch-off, $100,000 Colts Cash, a bacon-scented Bringin’ Home the BaconScratch-off, celebrated racing history with a 100th Running of the Indy 500® themed Scratch-off and became the first lottery in North America to launch a lottery ticket consisting of both a Scratch-off and a Draw game withBlack Pearl.