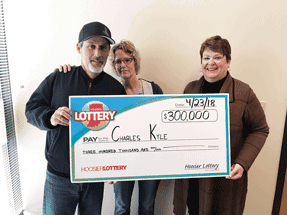 A Lafayette man won $300,000 when a Hoosier Lottery vending machine ran out of the game he intended to play.

Charles Kyle previously won $500 on a $10 Multiplier Mania Scratch-off. He put some of the money from his winnings into a Hoosier Lottery vending machine to buy additional Scratch-offs. While making his selections, he realized the game he wanted was sold out. So, he bought a $10 GOLDEN TICKET Scratch-off instead, winning the first $300,000 top prize since the game launched April 3.

Charles scratched the ticket in the store and immediately signed the back of his ticket when he realized he won.

Charles and his wife, Jeanne, were already planning a trip to Las Vegas, and are now considering taking a trip to the Bahamas. Beyond a bit of travel, the couple has no major plans for the prize money.

“A lot of this is staying home in the bank,” Charles said.

There are two top prizes of $300,000 remaining for $10 GOLDEN TICKET, as of May 2. The game also has a unique 2nd Chance opportunity. Click here for my2ndChance details.

$10 GOLDEN TICKET Estimated Overall Odds are 1 in 3.63. 2nd Chance promotion odds are dependent upon the number of entries received.